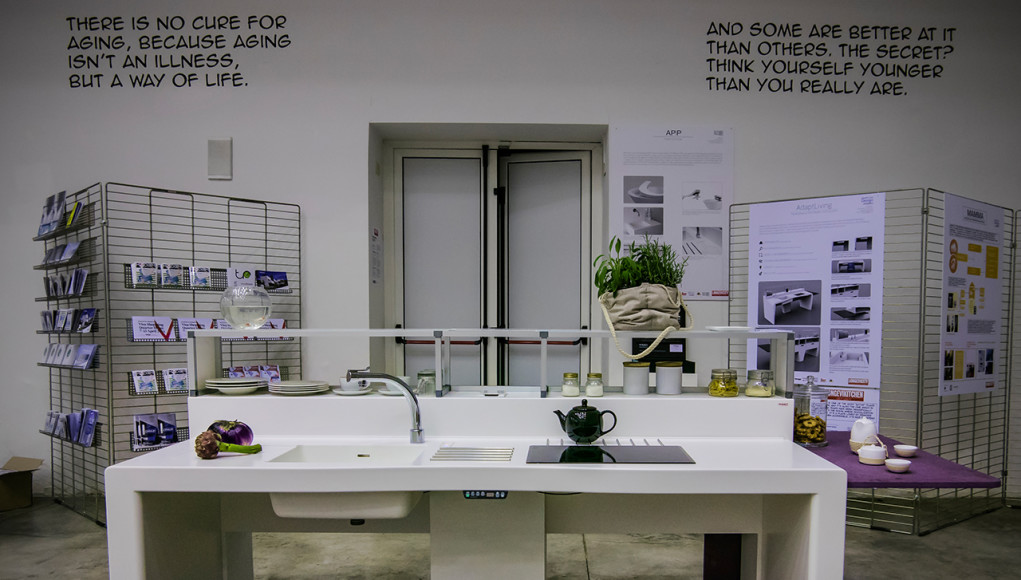 The Salone del Mobile week in Milan was pretty busy: a lot of interesting projects, a lot of interesting people and a lot of inspiration. Coming back to the usual working routine, we decided to discuss with you one very important subject: the role of 3d for product and industrial design. You are a 3d-artist, a designer or both – in any case you find in this interview a very useful information on developing your project and making most for it’s visual side. Meet our special guest – Alessandro Carpentiero, Italian designer,  who presented the kitchen prototype “AdaptLiving” at FuoriSalone. 3da: What is your workflow for making 3d for your design projects?

AC: I can start by saying that my drawing skills stopped developing at the age of 5 (and no, I wasn’t an enfant prodige), so 3d is definitely vital for my design projects. What I think is that the final goal of a designer is to represent an idea/concept in the best possible way, to make others (i.e. colleagues, carpenters, engineers, ecc) understand what he thought of. Every tool (drawings, 3d models, renders, physical models) is just a mean to an end. In my personal design workflow, I tend to use 3d in the very early stages. Firstly I do a lot of research, concept maps, and I usually end up with a lot of ideas  and  2-3 drafts. At this moment I start making a 3d model. I usually use Autodesk Inventor, because it’s very precise, thus it allows you to create different components, assemble them, and makes technical sheets or exploded axonometric in 0 time. Basically this software makes me save a lot of time for the operative phase. Inventor is a 3d solid modeler software, so it’s not always the perfect choice; if I need to create a “free-form” object with many curves, I use Alias Design. I can confess that I don’t like it very much; that’s why I want to learn Rhinoceros asap. About renders, I started using Keyshot 3 a couple of years ago, and fell in love with it. Solid render quality, easy interface, fast renders. Those are 3 key aspects for a designer. I don’t wanna spend days and nights doing renders; I prefer having a tool that allows me to have good images relatively easy. So basically, I use the 3d from the start. I see the 3d as toyland of clay, where I can start a basic idea, carve it, adjust it and assemble it, day by day, until I reach the final result. I change and adjust a lot of things during the project development, cause my 3d basically evolves as my concept idea does. 3da: You make renders yourself, but sometimes designers give their renders to outsourcing. What are the main difficulties and problems in cooperation between designer and 3d-artist? What 3d-artist should know to get in the head of the designer and to make maximum of this project?

AC: I wouldn’t actually define myself as a 3d-artist, I just try to represent my idea in the best possible way. So I guess that sometimes, for example if you need to create a catalogue or present your projects to others, it’s a good idea to give this work to others. I’ve never actually done that, but I think that the main problem here could be the different perspective of the two parts. The product designer probably thinks most about the product itself  and has specific things on his mind, like for example the feel (both physical and “psychological”) of the actual product.You can have a perfect render, but that maybe doesn’t communicate what you first thought of. It’s hard to explain this even to myself, so I can guess that talk about this kind of things to the 3d artist can be tricky. So basically 3d-artist should be aware of the existence of something I could define as the “soul” of an object; on the other hand designers should be able to better explain this to 3d artists. AC: Renders – once again – are something ESSENTIAL. As a product designer, except if you draw like Michelangelo, you must do renders. Lots of them. Answering to your question, yes I think there are some differences between renders. During the project development phase, I usually take basic “studio” renders, with a white background and no fancy stuff. That’s because you need to have an honest idea of how the product will come up; there’s no need to deceive yourself.  Actually, that’s also because you don’t need to waste hours (or days) waiting for a development render; it’s better to use that time to actually design and improve your project. And yes, before you make a prototype is really necessary to have renders (project developments one) but not just them. I think that before making a prototype, you should also start building a moke-up (aka a basic physical model), in order to start “seeing” the object in the real world as a 3d entity. That’s very important in the product design industry. When talking to carpenters I’ve also noticed that they like technical sheets better than renders, so that’s also an important communication tool. Renders for project promotion, in my opinion, are totally different. There you need to show something at its best. I’ll take model portraits as an example: I see the project development renders like the “photo boot” pics models must send to agencies, where they wear a basic underwear, no makeup, no smile, ecc. Pure and simple. That’s the development renders for me. On the other hand you can see project promotion renders as lingerie campaign pictures, where models are basically perfect. You can use every possible trick to make the picture more appealing: photoshop, wide-angle cameras, blur effects, etc.  Renders for promotion should also be put into a proper context; so for example, my kitchen should be put into a living room, with windows, lights, various objects on it, sofas, tables. This kind of things, as you all know, requires so much time. And I guess this is when the 3d-artists should come in: I think their goal is to make your product “alive.” 3da: Now when you have your kitchen done, how you evaluate you renders, what you would like to change and will make differently for your next project?

AC: This is the first time I’ve had a functioning prototype built, and it feels awesome. I can’t describe the feeling you have once you actually see and touch something you thought of; and yeah, it’s totally different than seeing the renders. The first thing I thought of when I saw the kitchen in real life was like “oh, that’s how it looks and feels!”. I know it may seem crazy, but an object is different if seen in a render or in real life. What lacks in the 3d, is a sense of space and dimension, that you can only experience once you are there, in front of your object. The dream of every designer is to draw something, and have it reproduced in the exact same way he designed it, but that’s basically impossible. In your mind everything is perfect as you want it, but the real world is a different thing. There you have to confront yourself with engineers and generally, with people that will build your design. They have specific knowledge and experience in it, and like to say “no, that can’t be done”. So basically, there’s a struggle between what the designer wants and what can be done, all controlled by 2 main factors: time and money. If you have plenty of both, you can do almost anything, but who does? Talking about my kitchen, I had a very short time to design it (like the day I knew I should have start thinking about it, was less than 4 months before the Fuorisalone event I had to attend to). So yeah, I had to make some compromises in order to had the prototype built in time (the carpenter had 4 days, so you can imagine I didn’t have much of a choice). My basic goal was to arrive at the event with a real object to exhibit, in order to show the improved accessibility I provided the kitchen with; so I decided I could have sacrificed some stuff. In fact, as you can see from the renders and the pictures, the prototype presents some differences with the original design: a lot less curves than I designed, there’s no plates rack, no drawers in the back, different sink and tap, the shelf doesn’t look that cool and the table is of a different color than I wanted it (though now I love this purplish shade). Of course you can’t possibly expect that the 1st prototype will be like the final product. That’s a process that requires time, tests and money. Another big thing I found myself to struggle with, was the “what’s inside” thing. My kitchen has a motor that regulates the height of the worktop, with 3 mechanic legs that do all the moving. At first I thought that 2 were enough, so I did all the renders with a perfect kitchen with just 2 legs, and a light plane. When I met with the carpenter he said “nope, we need another leg in the middle, and where’s the sink drain?”. So yeah, I had to re-do all the renders, change the technical sheets, and do a lot of yoga. I evaluate my renders as “that’s how the kitchen should finally be”. Though I’ve had some difficulties, I don’t think I’ll do something different with my next project: designers must be a little unconscious, and something don’t care too much about all the technical aspects, otherwise creativity would be compromised. Designing a product is a process, and it includes failures and errors. It’s part of the game! 3da: Can you make a forecast for the 3d-industry for product design? How you think it would develop in the future?

AC: I’m sure 3d-industry still has a lot to offer, and will extensively evolve. Besides becoming more photorealistic and more easy to use, I think that in the future we’ll have the possibility to actually “touch” something while modeling it (at least, I hope that this will be possible in the future), and maybe the augmented reality will become part of the 3d. It would be cool to “see” the kitchen you just modeled inside your actual livingroom. The kitchen prototype “AdaptLiving” has been designed by Alessandro Carpentiero & Sabrina Muschiato, from the Health Care Design Skillpoint at Politecnico di Milano. It’s specifically designed to improve the quality of life of aged or physically disabled people. The building of the prototype was financed by Poliform Varenna, while LG Hausys provided the HI-MACS material, of which is made of. 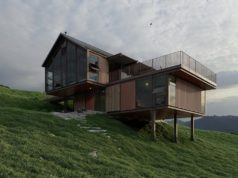 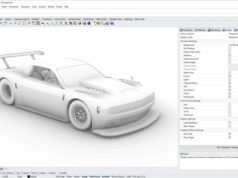 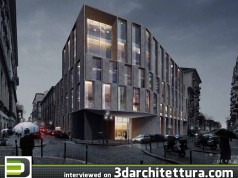